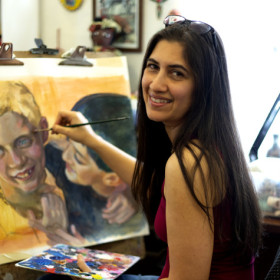 MCC alumnae Shachi Kale’s artwork causes people to stop and look a little closer at all the delightful details hidden in her paintings. You’ll find caterpillars in the corners, birds in the borders, and all types of patterns that give life to her creations.

She’s a visual storyteller, graphic designer and children’s book illustrator. Locally, her work has appeared at the Mesa Arts Center, Chandler Center for the Arts, Scottsdale’s Appaloosa Public Gallery, and even electric utility boxes in Chandler. In 2019, Arizona Citizens for the Arts selected Kale as the artist for the Governor’s Arts Awards.

Kale said she finds inspiration in the colors and patterns of India where she was born and in the desert flora and fauna of Arizona where she now lives.

“My earliest memories are of making art or wanting to make art,” Kale said. “I suppose I always knew I was an artist and that was the life I wanted to pursue.”

After completing art school in India, she and a friend opened their own design studio, which led to her illustrating three children’s books. In 2001, she and her husband moved to the United States.

In her artwork, she displays the alienation she felt from the transition of that move, resulting in the recent “Between Two Worlds” exhibit at Chandler Center for the Arts.

“I truly felt like I’d been dropped into a whole new world (and not in a good way),” she said.

As she settled into life in the United States, she enrolled at Mesa Community College to update her skills in Photoshop and Illustrator. That experience led to a job at MCC’s Institutional Advancement Office, which transitioned into her becoming a freelance graphic designer for Maricopa County Community College District for more than 18 years.

“MCC has always felt like a very welcoming and safe place to me especially as an outsider from another country,” Kale said. “I have over the years been so lucky to have worked with the most wonderful, professional and generous people who have supported me and helped me grow at each step.

“I have also been ridiculously fortunate in the teachers I met at MCC who shared their skill, knowledge and experience so generously, and who have always made such efforts to open doors of opportunity for me. I always hope that I can give back to others with the same generosity as was shown to me.”

Kale’s fans will be pleased to know she has a two-person art show with artist Swapna Das coming up at the MCC Art Gallery in Spring 2022. Her portion of the show is titled “Conversations with Myself II.” The exhibition opens with a reception on March 24 [updated from March 21 noted in the print edition] and runs through April 11. Additional details are available on the Arts at MCC website at mesacc.edu/arts/ZhP.

“In this show I’m exploring the constantly changing and shifting moods and conversations I have in my mind with myself - and these past years have forced me to have many, many conversations – ranging from anxiety to the bursting creative impulse – from calm to frustration,” Kale said. “I’ve tried to capture these mental landscapes using watercolor and mixed media on paper.”

She is also participating in a group show in Spring 2022 at the Tempe Center for the Arts titled, “Degrees of Being,” from January 22 - May 1.

Kale said she enjoys learning and hopes to keep doing so in the future.

“All forms of art excite me and I want to explore fiber arts, printmaking and ceramics, as well as explore portraiture, life-drawing and watercolors more,” Kale said. “In my art practice I am evolving, growing and trying to push my own personal boundaries of medium and scale and have been experimenting more with mixed media and material as well as the size of my art. I would love to have the opportunity to do a residency or participate in workshops where I can continue to push my own art and learn and grow.”

You can follow Kale’s explorations and journey on instagram@shachidreams and shachikale.com.