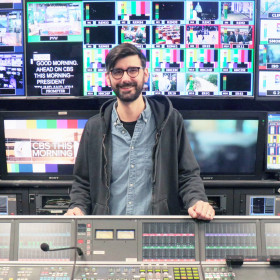 Thomas Patzner typically begins his day early, around 3 a.m., preparing for CBS This Morning, a national news-features program that CBS has aired for several decades. Patzner, an MCC alumnus, has been with CBS since 2014, working as an audio engineer and technician.

He draws from more than 10 years of experience which began with MCC’s Audio Production Technology Program, where he graduated with an associate’s degree in 2006. He’s done it all, supporting television, live music, theater, music/voiceover recording sessions, AV conferencing, and other major special events.

At CBS, he usually supports the morning broadcast from the audio side, mixing the talent on air, but also handles back end communications for producers, other technicians and reporters who may be out in the field. He assists other broadcasts as needed.

“I do enjoy my job,” Patzner said. “It’s a good mix of technical skills, keeping a changing rundown of events in your mind as you go through a live show and then in between, getting maintenance projects done, keeping things updated.”

When he first began at CBS, he helped launch CBSN, a streaming video news channel operated by the CBS News and CBS Interactive divisions of the CBS Corporation. He helped get CBSN off the ground during the election season, then they pulled him over to the network side of things, where he is now.

Patzner’s interest in audio engineering began at MCC, where he enjoyed classes with Andy Seagle, an instructor in the Audio Production Technology Department.

“He gave me a lot of time in the studio, a lot of one-on-one time,” Patzner said. “We started up the Audio Engineering Society (AES) student section when I was there and at that time, they were really building out the studios.”

After graduating from MCC, he worked at Allaire Studios, a New York recording studio, then finished his bachelor’s degree at State University of New York at New Paltz in 2009.

“That led me to work in entry level television work, reality shows and news,” Patzner said. “It was a shift from working in recording studios. The studios were shutting down those years, but they needed television show technicians, so I worked my way up that way and wound up jumping over to news broadcasts at Bloomberg News before finding my home at CBS in 2014.”

Patzner said he was surprised when he started at how big CBS was.

“CBS takes up a whole city block,” Patzner said. “I was in the digital section, but then I realized what we had available and all the systems they had.

“It’s a union job, which is great. That’s something you don’t always get as an audio technician. That’s been a big help to me.”

He said he runs across a lot of famous people at work but didn’t get into it because of that.

“That’s just how it is,” he said. “The hours aren’t convenient, you show up before and leave after the guests are there. I’ve spent a lot of time on the road and met a lot of interesting people. There’s also a lot of creative stuff going on and opportunities to do music production. We have a band every Saturday on our shows. Sometimes we’ll be taping the band and suddenly there’s breaking news, like the president or a disaster and we’ve had to stop the band to turn the cameras to someone at the desk. It’s a challenge to do both in the same studio.”

He tells other students that the news broadcast field has a lot of jobs for audio engineers.

“It might be a bit tough, but you can find them,” Patzner said. “The hours are off, they can be late or early, but it’s a good mix of technical skills and supporting the arts with big systems. You can go in a number of directions, like theatre, television, radio and then online streaming platforms, which are going to be more prevalent.

“If you can maintain good production standards for audio, you can do it for television. Doing it right was what Andy always taught.”

He said his experience at MCC was valuable.

“The whole time I was there, if I wanted to get an outside project off the ground or get funding, there were always people to facilitate that, like Seagle or Keith Heffner,” he said. “I was involved with the MCC student band, Scuba Cats. We went to Disney with the band. It was a creative spot to be in. There is a lot of good music in the Valley.”

Professionally, Patzner plans to stay at CBS. He is currently training to mix other shows like the CBS Evening News.