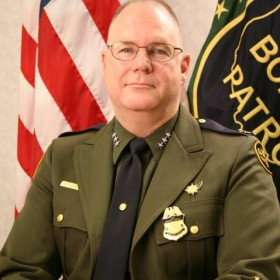 On any given day, Mesa Community College alumnus Ron Colburn may brief Homeland Security Secretary Janet Napolitano, or the White House, or Congress, about the issues of the day as he fulfills his duties as Deputy Chief of the U.S. Border Patrol.

Ron, who graduated from MCC in 1977, went on to graduate from the U.S. Border Patrol Academy and never looked back.  He has served through six administrations:  Carter, Reagan, Bush (41st president), Clinton, Bush (43rd), and now the Obama Administration.

Ron said one of his most interesting assignments was to the White House from 2002-2003, where he served as the Director for Law Enforcement, Border & Transportation Security Directorate, Homeland Security Council, with the Executive Office of The President.

“There were some real ‘pinch me’ moments during that time, as that was when the new Department of Homeland Security was created, and many instances of counter-terrorism activities occurred,” Ron said.  “I was the proverbial “fly on the wall” for some spine-tingling, even hair-raising conversations, planning sessions and special, national events.”

Today, Ron oversees an operational budget in excess of $3 billion dollars annually and is in charge of a fleet of 13,000 vehicles and conveyances that deploy along the U.S. southwestern and northern border, plus some coastal areas.

His office is located just two blocks away from the White House. Ron said as he drives over the Potomac River each day to begin work, he is reminded of the importance of his job.

“During this pre-dawn drive (5:30 a.m.), I view the Washington Monument and the dome of the Capitol building, lit up with floodlights, casting a stark reminder that I work within the leading, central governmental system of the western free world,” Ron said.

While at MCC, Ron played football for the Thunderbirds, served as president of the student government and lobbied on behalf of Arizona community college students.

He also worked in MCC’s audio-visual department, where he met his future –and still current—spouse, Deborah E. (Hicks) Colburn, when he filmed her dance performance.  They married in 1979, had two sons and now have eight grandchildren.  He is appreciative of the opportunities MCC gave him in regard to his professional life as well as his personal life.

“Talk about carrying something away from your college experience…well, eight grandkids count, right?” Ron said.

This alumni profile first appeared in the Fall 2009 edition of Alumni & Friends, a publication for the Mesa Community College Alumni Association.  http://mesacc.edu/sites/default/files/pages/section/about-mcc/institutional-advancement/communications/AFFall09.pdf