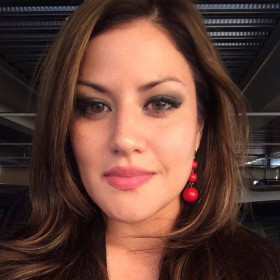 More than a decade ago, Monique Griego knew she wanted to go to college after graduating from Mesa High School. But putting two children through college was going to be next to impossible for her mother. For Monique and her sister, Mesa Community College was the perfect choice.

“I came to MCC in 2006 right out of high school,” said Monique, a reporter for 12 News at 10 p.m. and an anchor of 12 News Weekend Today on Sunday mornings. “I knew I wanted to go to college but I couldn’t afford ASU (Arizona State University) at the time. I took my general studies classes and got all of my math, science and English classes at MCC.”

Monique graduated from ASU’s Cronkite School of Journalism & Mass Communications and began her career reporting at the NBC affiliate in El Paso, TX, where she eventually became the morning anchor. Later she became a reporter for the CBS affiliate in Baltimore, MD, and in 2014 returned to the valley to work for Channel 12.

She said one of her fondest memories of MCC is her algebra teacher. Though she couldn’t recall his name, she said he was representative of the rest of those working at MCC. “He was very nice, and I liked MCC because it was small but not too small, and the teachers were personable.”

“MCC wasn’t high pressure like going to the university right out of high school,” she added. “I heard from friends who went straight to ASU, and many of them struggled. It was an easy transition for me from MCC to ASU. By the time I transferred, I felt ready.”

Monique said she has seen the benefit of MCC in her community from observing her own friends and family. “A lot of my friends went to MCC before ASU,” she said. “It was close to home so you could live at home and still go to college, and it was affordable. For people who want to go to college and have dreams of a better life but have challenges, like economics or they’re already working full time, having something in Mesa like MCC is very important.”

With MCC celebrating its 50th anniversary in 2015, Monique said it was important the college continue “to stay relevant to the community, adding programs and making sure they keep progressing with technology and offering people what they will be interested in,” she said. “We need to make sure MCC maintains availability and variety, for fun classes as well as the basics, at an affordable price. Even if students have challenges, you don’t want them to feel limited. You want them to feel like they’re getting the same opportunity as everyone else.”

Monique also said she takes pride recommending MCC to others.

“Student loans can add up, and some people like to get away from home to have the college experience,” she said of those who go directly from high school to the university. “I don’t feel like I missed anything going to MCC. The classes were smaller and more intimate, and the economic difference is thousands of dollars a semester. My sister also started at MCC and she’s a teacher now. Financially, it was the only way my Mom could put two girls through college.”

“I’m glad I went to school at MCC,” Monique said. “I remember it fondly.”