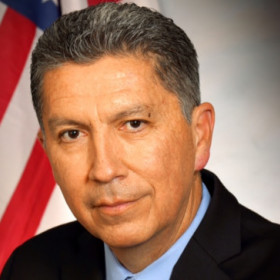 What’s it like to have one of your first college classes taught by your father? We asked Mesa Community College alumnus Gilbert M. Orrantia, (1976-78) now the Director of the Arizona Department of Homeland Security, about his experience taking a Spanish class taught by his father in the ‘70s.

“It was actually fun to be sitting in one of my dad's classes,” said Orrantia, whose father, Gilbert, taught at MCC for more than 15 years. “I enjoyed seeing a different side of my father and will never forget that experience. I have to admit that at first I was a little worried about it, but it turned out to be a lot of fun.”

That experience was just the beginning of an education inspired by several MCC professors he describes as extremely dedicated.

"My instructors were people who had done a lot in their lives, and were dynamic and passionate about their profession. That made a huge impression on me. As a result, I have tried to learn to emulate that dedication.”

During his career as a public servant, that dedication is clear. After attending MCC, Orrantia graduated from ASU in 1980 with a B.A. in Secondary Education and then became interested in law enforcement. He served as a Supervisory Special Agent and Special Agent with the FBI for 26 years and retired from FBI service in 2008.

In 2009, he was appointed as Director of the Arizona Department of Homeland Security and currently works for the State of Arizona, serving as a member of Governor Doug Ducey’s Cabinet.

“I truly believe that there is no more important mission than public service,” Orrantia said. “I have been proud to serve as a law enforcement officer and have thoroughly enjoyed being involved in public safety for the last 35 years.”

Orrantia demonstrates a national and global perspective on counterterrorism in his current position that is gained from vast experience that includes the supervision of an FBI counterterrorism squad in Phoenix, serving eight years as a Supervisory Special Agent and leading the FBI’s Joint Terrorism Task Force in Phoenix for four years.

His successful FBI law enforcement career is reflected in the numerous awards and commendations he received, including the Medal of Valor and the FBI Star, two of the FBI’s highest commendations. The awards were for his role in the deadliest firefight in FBI history, a gun battle known as the “Miami Shootout” in which two fellow FBI agents were killed. The incident later led to the introduction of more powerful handguns in the FBI and many police departments around the United States.

He continues to share his expertise in surviving a deadly encounter with numerous law enforcement agencies. Orrantia also serves on the executive committee of the National Governors Association Homeland Security Advisors Council and is Co-Chair of the Governor’s Arizona Human Trafficking Council.

Orrantia tells students today that education is the key to a successful career.

“In today’s world it is important to be able to communicate, be a critical thinker and contribute to society,” Orrantia said. “I would also tell them that for me, Mesa Community College provided a window to opportunities and allowed me to build my foundation of knowledge. The learning environment at MCC allows students to explore different careers, philosophies, and ideas. I am grateful to have attended MCC.”