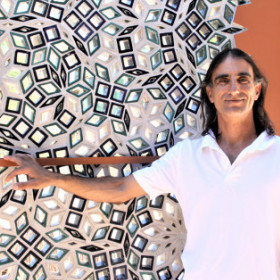 Geoff Coppola’s fascination with the pattern and beauty in nature is the inspiration behind an innovative piece of art recently installed near the physical science building at Mesa Community College’s Southern and Dobson campus. Coppola collaborated with MCC math and computer science professor Madeleine Chowdhury to bring his design to life, AllisOneenOsillA, a palindrome for All is One, One is All. The live-edge steel frame was crafted by MCC welding faculty Robert Holmes with assistance from Merri Stafford, a welding alumna.

The name chosen, AllisOneenOsillA, suggests how many small pieces make up a larger piece and an analogy of how many citizens make up one larger community, a tie to MCC’s International Education Department. The pattern of the blocks create an interesting interplay of light and shadow on the face of the artwork and behind it, which changes depending on the angle and the season.

The free-standing art piece is a two-dimensional representation of the structure of a dodecagonal quasicrystal, composed of approximately 2,600 high-fire ceramic blocks. But it’s much more than that. The artwork serves as a mathematical symbol of unity and the effort and vision of educators who are dedicated to promoting innovation and creativity in the academic disciplines of science, technology, engineering, art and math -- known as STEAM.

Coppola said the process of creating the piece began when he was a student at MCC (2009 through 2012). He was inspired by the open-door policy of many of the professors, especially his math professor Adam Avilez.

“I spent a lot of time in his office and one day I heard Madeleine talking about different math concepts,” Coppola said. “I told her, ‘I have a puzzle that needs to find a home.’”

He brought 400 tiles to campus and Chowdhury helped him put the beginnings of his design together. Coppola’s enthusiasm for the project was contagious and soon Avilez, Chowdhury, astronomy professor Kevin Healy and other professors dedicated to the STEAM philosophy encouraged Coppola to continue the project and assisted in the development of the mock up.

For Coppola, who returned to college after being injured in an industrial accident several years ago, the art piece is among other things, a testimonial of gratitude to professors who in their own ways bring honor to the title "teacher.” He added that the monument serves as a learning tool for students and a teaching tool for instructors.

“While it was being constructed, a student walked by and talked to us about the fact that she couldn’t decide whether to major in art or science,” Coppola said. “That’s the inspiration this piece will provide on campus--that it’s not cut and dried and all disciplines are connected.”

Coppola said he is thrilled to see his art on campus and share his passion with his daughter.

“I love the color and the patterns because it’s what the world is composed of,” he said. “There’s incredible beauty in the microscopic world and I tried to portray that.”