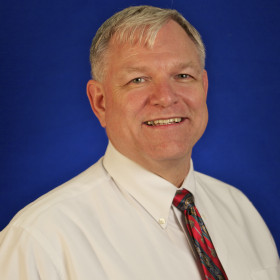 When Arlen Sykes retired from the U.S. Navy, he decided to attend Mesa Community College to become a physics teacher.

It didn’t take him long to switch his major.

“I wasn’t doing well in math, and I went to Dr. Ewing, and she said maybe it’s a good thing, because what kind of teacher would you be when it’s hard to associate with those struggling in class,” he said of his math studies. “She made me understand that there’s a different type of motivation for each student.”

Searching for insight into why some students struggle led him to a new major: psychology. He received an Associate in General Studies (1998) and an Associate of Arts in Education (1999) at MCC before transferring to Arizona State University, where he received a Bachelor of Arts degree in Education. He also has a Master’s Degree from Northern Arizona University.

Arlen credits MCC for helping him master research skills, which led to success at ASU and NAU.

“The research I started at MCC, ‘Sex Typing as a Function of Age for Kindergarten through 4th grade’, compared youngsters and how they respond to different shapes, numbers, letters, and words,” Arlen said. “MCC helped prepare me for ASU and NAU, especially the research portion.”

Arlen said once he got started at MCC and became involved in student activities, the process snowballed.

“I was so involved at MCC, but I can narrow it down to one thing,” he said. “I filled out an application packet and made the All-Arizona Academic Team. Then I was in student government, on the naming committee for the Red Mountain Campus where I represented students. I chartered the Phi Beta psychology society alumni chapter, and was a founding member of Phi Theta Kappa’s alumni chapter.”

“It’s hard to describe, but MCC has the ability to make you believe you can achieve anything in class or your career, no matter what it is. The professionals and staff at MCC, when you talk to them, they’re motivated for you to succeed.”

Arlen now teaches 5th grade in the Kyrene School District, and he calls MCC a “catalyst” for changing lives for more than five decades.

“Mesa and the surrounding area has gone through a lot of changes, but there’s been one constant you can rely on, and that’s MCC,” he said. “MCC has changed to keep up with new challenges in education and the political impact in the state, and MCC is always there. Businesses open and close, it doesn’t matter what happens, you can always rely on MCC to be there and be proud that it has something for residents to build on. MCC has always been so strong with business partnerships and as a responsible community member.”

Arlen said it was vital for MCC to “continue to build on community relationships and stay ahead of changes in educational practices, and then make those changes to stay a strong educational institution.”

“MCC is by far the best community college, and I’ve been through several outside Maricopa, and my son attended the ASU connect program,” Arlen concluded. “MCC always has the students’ best interests at heart and student success is its first priority. They’re a catalyst to whatever students want to do, how can we get this student successfully through this college and be a lifelong learner, how can we get them to come back and continue their education?”

“I tell kids to go there with an open mind,” Arlen said, reflecting on his own experience, “because as soon as you’re exposed to the college environment, you might change your mind. Opportunities are there at MCC.”