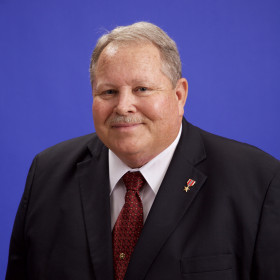 Terence Azbill attended MCC 1974-76, serving as Chief Justice of the Student Court and playing on the 1975 National Junior College Championship Football Team. After MCC, he began a distinguished career in law enforcement, and was nominated and selected by Arizona Governor Bruce Babbitt to attend the International School of Police Executives at Northwestern University.

Terence returned to MCC in the 90s, earning his Associate degree in 1998.  He went on to complete his Bachelor’s and has put his Master’s degree in Counseling to good use, helping countless police officers and soldiers to alleviate the stress of their jobs.

He is currently the Chief of the Office of Special Investigations for the Arizona Department of Economic Security. A member of the Arizona Department of Public Safety from 1978 to 2004, Terence Azbill rose from patrol officer to Director of Intelligence. He has also worked for the Southwest Border High Intensity Drug Trafficking Area, a program from the Executive Office of the President, Office of National Drug Control Policy. He is a Desert Storm/Desert Shield veteran of the U.S. Army.

He has received numerous awards, including the Arizona DPS Valor Award for Bravery, the State of Arizona’s highest award, for a shootout preventing a bank robbery; and the U.S. Army Bronze Star Medal and Commendation Medal. A dedicated husband and father of 38 years, he is said to be most proud of his children, who are also continuing the family’s legacy in policing.