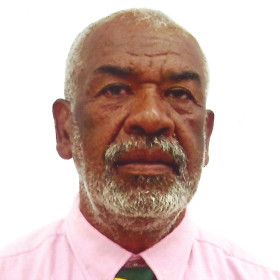 Neville’s distinguished athletic career began in 1963 while in high school in Jamaica. He set records at countless local and national meets. In 1964, he ran the 880 yards in 1 minute 47.2 seconds, becoming the first Jamaican Junior World Record Holder, a title he holds to this day. The British magazine World Sport awarded him a Certificate of Achievement and the local newspaper dubbed him The Indomitable Distance Man.

Graduating high school, he came to Arizona and helped what was then the Hokams (before we became the Thunderbirds) win the 1968 National Junior College Athletic Association Track and Field championship. During 1967 and 1968, Neville won three NJCAA individual championships, twice in the 880-yard run and once in the 440-yard hurdles. At San Jose State College in 1969, he ran on a sprint medley relay team at the Fresno Relays that clocked the second fastest time in history, missing the world record by one-tenth of a second. Graduating San Jose State College in 1971, he earned a Bachelor of Social Science and another in Physical Education. In 2016, he was inducted into The San Jose State University Hall of Fame.

Neville competed in the Olympics for Jamaica in Tokyo in 1964 and Mexico City in 1968. He also competed twice in the Commonwealth Games and once in the Pan American Games. He returned to Jamaica to teach and coach several Olympians. Neville was manager of the JAMALCO Sports Club. In recognition of his unselfish contribution to his community and nation, particularly in the field of sports, in 2006 Jamaica awarded him the Order of Distinction, Officer Class.