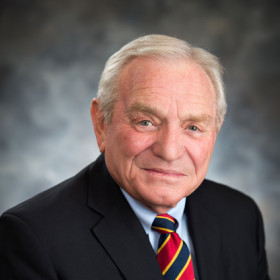 In 1963, Roc became the very first MCC student body president. Adding to his MCC legacy of service, he is a founding member of the MCC Alumni Advisory Board and lifelong advocate for education. While at MCC, he started his nearly 40-year career as an insurance agent.

Raising his family in the East Valley, he participated on local and state boards including the Arizona State Board of Transportation from 1996 through 2002, and, for 18 years, served on the Board of the Maricopa Association of Governments. In 2002, he became president of the East Valley Partnership, which at the time was in need of funding and a champion. He served five governors, recommending East Valley candidates for the Arizona Board of Regents. Roc is renowned as a leading voice for economic development in the East Valley and fierce advocate for K-12 education.

His vision and leadership is reflected in Superstition Vistas, one of the largest contiguous ownership parcels in the state of Arizona. Roc obtained grant money, donations and volunteer efforts to create a master plan for the State Land Department to use when auctioning this and other pieces of the East Valley.

When he retired from East Valley Partnership, Arizona State University President Michael Crow recruited him to help grow the engineering output at ASU Polytechnic University in Mesa by working to develop scholarships and business opportunities.