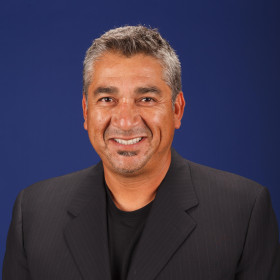 Albie Lopez, a right-handed pitcher for the Westwood Warriors, was a member of the 1989 United States Junior Olympic team, which won gold and bronze medals. He was awarded a full athletic scholarship for baseball at MCC and led the Thunderbirds to the 1990 Junior College World Series while earning First Team All-American honors for himself.

Albie was drafted by the Cleveland Indians in 1991, and played his first Major League Baseball game on July 6, 1993, pitching his first shutout in 1994. During his 13-year baseball career, Albie compiled 297 games pitched, 92 games saved, 841.1 innings pitched, 47 wins, 558 strikeouts, and a 4.94 earned run average. He was honored in 2000 as the Player of the Week, while playing for the Tampa Bay Devil Rays, and in 2001 Albie reached the ultimate honor in Major League Baseball with a World Series win with the Arizona Diamondbacks.

Albie was inducted into the Mesa Public Schools Sports Hall of Fame in 2013. In an article in MCC’s student newspaper, the Mesa Legend, Albie shared, “My entire life has been about baseball. My parents tell me I picked up a baseball at about the age of 3, and I haven’t put it down yet. Baseball pitching is my passion.” Albie continues to assist other players in achieving their dreams, running a baseball instructional league with players across the country.