In 1978 Mesa Community College opened the doors of its first full theatre facility. The theatre, built with an original price tag of about $1.1 million, was originally dubbed The Theatre Outback, deriving its name from the lack of buildings on the southern part of the campus at that time, making the area “out back” in regard to the main campus. No longer “out back”, as the MCC campus has grown in size over the years, the facility is now simply known as the MCC Theatre. 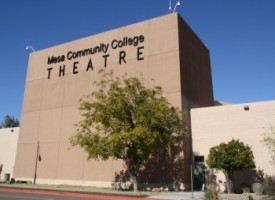 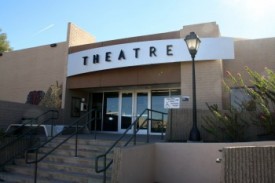 The MCC Theatre has been an important venue for the college’s performing arts program and a community landmark. For 30 years, the 270 seat theatre has fostered the budding careers of thousands of students, welcomed community forums and hosted the President of the United States.

The opening of the theatre in 1978 allowed the MCC theatre program to grow. Previous theatre productions were performed in the student cafeteria or wherever there was space. The theatre, originally intended to be a lab for theatre students, has hosted several other events over the years, the most notable being an appearance by George W. Bush in 2004 to discuss his proposal for federal grant job training programs for community colleges.

The venue’s primary purpose, however, has been to nurture and train the college’s students in all facets of the performing arts. Numerous musical, theatrical and dance productions have produced award-winning performances.

In 2012 the MCC Theatre underwent a large scale $2 million renovation. In addition to providing major architectural changes to the theatre’s lobby and west wing the renovations also updated many of the theatrical systems propelling the MCC Theatre into the 21st century of theatre technology. These upgrades give MCC students the opportunity to be trained in the use of new state of the art equipment; preparing them for careers in the current entertainment industry.