The Value of Career and Technical Programs at MCC 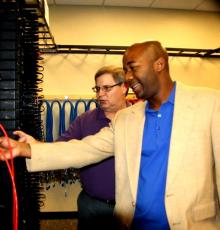 MCC graduate Jessie Sneed At a time when students are intent on getting the best value for their tuition dollars, Mesa Community College is committed to providing programs designed to develop the skills that today’s employers value.

Phebe Blitz, Dean of Instruction for Career and Technical Programs at MCC, said this economy has many people seeking retraining for better job prospects as well as high school grads looking to obtain specific skills that will make them employable.

“People are more conscious about receiving training for specific skills,” Blitz said.  “They are much more job-oriented.”

With 32 career and technical programs offering over 150 associate degree and certificates of completion opportunities, students have a variety of options.

“MCC has such a range of Career and Technical Programs,” Blitz said. “There’s everything from networking system administration to welding technology to veterinary technology to interior design.”

For MCC graduate Jessie Sneed, the education he received in networking and security helped him start his own business, NerdPosse LLC, which provides network support and computer repair. He earned an associate’s degree at MCC before transferring to Arizona State University, where he graduated with a bachelor’s degree in operation management and entrepreneurship.

“My experience at MCC enabled me to connect with others in the industry,” said Sneed, who began his business while attending MCC.  “The connections I made were invaluable and are still with me today.”

Sneed said he had been interested in computers since he was a young child, but the advisors at MCC helped him pinpoint exactly what he wanted his specialty to be.

“By focusing on the networking field, I was able to present myself to the business world and have since accomplished many large industrial projects,” Sneed said.

Bob Samson, a computer information systems instructor in MCC’s Networking Academy, said there is a strong demand for employees with the skills taught at the networking academy.

“Potential employers, some of whom took our classes, routinely contact us and ask us to forward job openings to the classes,” Samson said.

Computer networking, system administration, security and communications have been rated as some of the most in-demand technical jobs.  Many local and national companies such as Avnet, Insight, Go-Daddy, General Dynamics and others advertise for employees with these skills.

MCC graduate Dana Yanch, who earned an associate’s degree in Networking Administration, said the program and instructors did a fantastic job preparing him for employment.

“From the first day of classes it was obvious that the instructors teaching the classes had many years of field experience, which allowed the students to glean some very important hints, tips and habits before graduating,” said Yanch, who works for Insight Enterprises in Tempe as a network architect.  “I felt completely prepared to hit the ground running when I was recruited into my first job after college.”

Many students who attend MCC’s Network Academy obtain internships as well. MCC student Justin Decker, who was a winner in the 2012 Avnet Tech Games, is currently working at an internship at Avnet.  His manager has told him there is a good chance he will be hired permanently.

Decker said he was also told by a hiring manager at Insight that MCC’s Network Academy is the best in the state.

“Not only that, but the low cost of community college tuition and the fact that books are entirely optional keeps the costs really low compared to other avenues of learning about networking,” Decker said.  “It’s a total win-win deal.”