Kara Thomson MESA, Arizona – March 4, 2022 -- Kara Thomson, Mesa Community College faculty and co-director of the Theater and Film Arts department, received the most prestigious regional award given by the Kennedy Center American College Theater Festival (KCACTF) – the Gold Medallion. It is considered one of the great honors in theatre education.

“The Gold Medallion is the fanciest, shiny gold thing we have to offer her for significantly contributing her time, artistry and enthusiasm to KCACTF, and I know of no one who deserves this more,” said Jenny Kokai, KCACTF Region 8 National Playwriting Program Co-Chair and Weber State University theatre professor.

Thomson received the medallion at a virtual Festival Awards Ceremony on February 11, 2022.

The award is given each year to individuals or organizations who demonstrate a commitment to excellence in educational theatre and have contributed to the development of the KCACTF.

Each year, the KCACTF brings together students from colleges and universities across the country where they have an opportunity to attend workshops, share their work, and learn from professionals, faculty and other students. 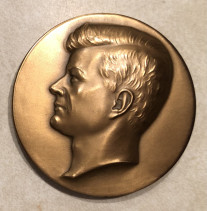 KCACTF Gold Medallion “Kara worked with multiple leadership folks to create inclusive engaging lists of theoretical projects for students,” said Kokai. “She worked to find respondents who could offer generous and generative feedback so students could grow as artists.”

Thomson held many roles with the KCACTF national theater program during the past 13 years. Most recently, Thomson served as Design Technology and Management chair from 2018 to 2021, and three years prior as the vice chair.

The Kennedy Center American College Theater Festival (KCACTF) is a year-round program in eight geographic regions in the United States. Regional activities are coordinated through eight KCACTF regional chairs and eight KCACTF playwriting awards chairs. With funding and administrative support from the Kennedy Center, the regional chair coordinates with the Co-Managers of KCACTF all aspects of productions on the local and regional level and supervises regional-level KCACTF award competitions. In January and February of each year, regional festivals showcase the finest of each region’s entered productions and offer a variety of activities, including workshops, symposia, and regional-level award programs. Since its inception, KCACTF has given more than 400,000 college theater students the opportunity to have their work critiqued, improve their dramatic skills and receive national recognition for excellence. More than 16 million theatergoers have attended approximately 10,000 festival productions nationwide. For more Information, visit kcactf.org

An education in Theatre & Film Arts at MCC provides a valuable base from which to launch careers in film, television, stage, management, marketing, advertising, law, politics, theology, social work, or therapeutic fields. Students are provided opportunities to work with industry professionals from across the country and be successful at national competitions such as the national Kennedy Center American College Theatre Festival and the AriZoni Theatre Awards of Excellence. Experience ranges from acting, design, writing, directing and serving as a crew member in a variety of productions. Learn more about the program and upcoming performances at mesacc.edu/arts.