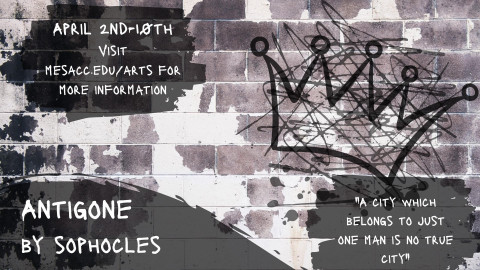 Antigone, pronounced ann-TIG-ə-nee, features the question of the difference between the spirit of the Law and letter of the Law. The ancient play highlights themes of honor, loyalty, love, betrayal and conviction.

Work on the project started in August 2020. A student-designed film, the work began as the Fall 2020 semester did. After online rehearsals, filming commenced in February 2021 on the MCC Southern and Dobson Campus while observing CDC social distancing guidelines.

The film is a labor of love for Kevin Dressler, director of the MCC Theatre and Film Arts department. Directing Antigone is his last major MCC performing arts project before retiring.

“I think everyone will be surprised with the Theatre & Film Arts film of Antigone. It’s the first full-length movie the department has ever produced,” Dressler said. “Given the fact that the entire film was shot in 10 eight-hour days, while also adhering to Covid protocols, the end product is remarkable. And, it was a terrific introduction to the work of the film industry for all involved, especially our students.”

Travis Marsala, Associate Director of Antigone, also graduated from MCC in 2010. He now resides in Chicago and has worked as a screenwriter, director, and is an accomplished puppeteer and cartoonist.

The film will be streamed virtually in six showings the week of April 2 - 10 and two drive-in movie showings for the premier April 2nd and 3rd. Tickets can be purchased at mesacc.edu/arts (mesacc.edu/arts/Zsi).

Mesa Community College is nationally recognized as an Aspen Prize Top 150 U.S. Community College and is known for service learning, career and technical programs, civic engagement and innovative approaches to education. For more than 50 years, the college has served as a resource for career readiness, transfer education, workforce development and lifelong learning. Host to more than 30,000 students annually, MCC offers degree and certificate programs at its two campuses, additional locations and a combination of online formats. Through Guided Pathways with Integrated Support Services and a commitment to diversity, equity and inclusion, MCC is transforming how it champions student success, college completion, university transfer and career attainment and advancement. MCC is a Hispanic Serving Institution and nearly 50% of its students are the first in their families to attend college. Its American Indian Institute serves students from the 22 federally recognized tribes of Arizona as well as out-of-state tribes. MCC has the largest indigenous student population of all the Maricopa Community Colleges. The diverse student body includes more than 300 international students from 55 countries. Award-winning faculty are dedicated to student success, providing the education and training that empowers MCC students to successfully transfer to a university or compete in the workforce. Located in the East Valley of Phoenix, Arizona, on the traditional territories of the O'odham, Piipaash and Yavapai Peoples, MCC is one of 10 colleges in the Maricopa County Community College District. Visit mesacc.edu to learn more.

MCC is accredited by the Higher Learning Commission (HLC), hlcommission.org.

The Maricopa County Community College District (MCCCD) is an EEO/AA institution and an equal opportunity employer of protected veterans and individuals with disabilities. All qualified applicants will receive consideration for employment without regard to race, color, religion, sex, sexual orientation, gender identity, age, or national origin. A lack of English language skills will not be a barrier to admission and participation in the career and technical education programs of the District. MCCCD does not discriminate on the basis of race, color, national origin, sex, disability or age in its programs or activities. For Title IX/504 concerns, call the following number to reach the appointed coordinator: (480) 731-8499. For additional information, as well as a listing of all coordinators within the Maricopa College system, visit www.maricopa.edu/non-discrimination.