Zahid Arab of NBC’s KING 5 News in Seattle is known as a compassionate reporter who gets the big story by gaining the trust of those he interviews. He provides crime victims and their families the opportunity for their voice to be heard.

Arab, who graduated from Mesa Community College in 2004, credits his experience at MCC for teaching him the interpersonal skills he uses in his job today. He said Duane Oakes, MCC’s Chapter Advisor of Phi Theta Kappa, and other instructors helped nurture his potential and provided him with valuable experiences.

“Without Duane and other teachers reaching out every day in classes, I don’t think I’d be where I am today,” Arab said.  “The leadership and confidence I gained in PTK catapulted me in my career.”

During his time at MCC, Arab majored in journalism and wrote for the Mesa Legend.  He worked as a counselor in Multicultural Services and served as a PTK Regional President and International Vice President. After graduating from MCC, he earned a degree in Journalism and Mass Communication from Arizona State University.

Directly out of college, he covered the presidential candidates during the 2008 Iowa Caucus as a reporter at KCAU.  He interviewed Barack Obama, Hilary Clinton and John Edwards, among others. Arab said his ability to feel at ease with the political heavy-hitters came from his experience as a PTK officer.

“Speaking to people, asking questions, researching topics, all of that helped me as a reporter,” Arab said.  “I felt leaps and bounds above others who had just graduated. I always wanted to be a reporter, but I don’t think I’d be as successful.”

Arab was awarded an Iowa Associated Press Award for uncovering a flaw in a local sex offender law.  He went on to report the news in Honolulu and Las Vegas and now works as a general assignment reporter in Seattle. On a recent visit back to MCC, Arab helped PTK students kick off their C4 College Completion signature wall and reminisced about his time at MCC.

“For me, it was not just a campus, but a culture of success,” Arab said.  “At MCC, you’re not just a number; you’re someone that faculty and staff really want to teach.”

Please direct media inquiries to Angela Askey at angela.askey@mesacc.edu or Sally Mesarosh at sally.mesarosh@mesacc.edu  or the Office of Institutional Advancement at 480-461-7445.  IA website:  www.mesacc.edu/ia. 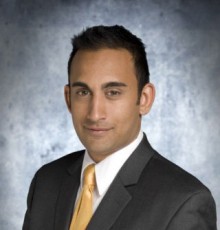