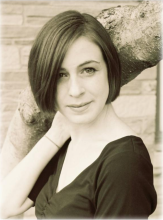 This is her off-Broadway debut – when the lights of off-Broadway beckoned, Diaz couldn’t say no. “I am overwhelmed and proud to be a part of this project and elevating and celebrating Latino voices,” she said. “It’s something that people work towards for their entire career.”

“Americano: The Musical” is based on the true story of Tony Valdovinos, a Dreamer who grew up in Phoenix and discovers he’s an undocumented immigrant when he attempts to enlist in the Marines on his 18th birthday. A graduate of Camelback High School, Valdovinos had been brought to the U.S. at the age of two. The play chronicles his emotional journey and uncertain status in the country he loves.

For the play’s costume design, Diaz said it was important to make the characters capture the beauty of Arizona and Chicano culture, “but also really help us feel like we are part of Tony’s journey.”

Her greatest inspiration for the production, though, were many of her MCC students.”This story reflects them,” she adds. “As faculty at a community college, I have been able to watch many students go through some major transitions on their path and this story reflects that. I hope my design is able to reflect the path and growth that a person goes through as they face adversity and grow and develop their own voice, passion and strengths.” Diaz said she managed to “sneak in” a shirt from MCC and Gateway Community College into her designs. 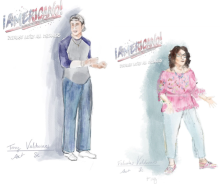 Renderings of tow of Adriana Diaz's costume designs for Americano: The Musical Diaz is a regional designer who has designed multiple shows across the Valley including shows at The Phoenix Theatre Company, Childsplay, Arizona Opera and in other states. Diaz was asked to design the production’s costumes by Michael Barnard, the play’s co-author and director. He is also the producing artistic director of The Phoenix Theatre Company, the first company to produce “Americano: The Musical” which had a record-selling run. “I’ve worked with Michael for many years and have designed many shows for him,” Diaz explains. “I actually first moved to Phoenix to be The Phoenix Theatre Company’s very first costume intern years ago, sewing on buttons and running wardrobe backstage. But after graduate school I returned to Phoenix and began regularly designing for the company.”

Diaz recently returned to MCC from New York to prepare students for the Immersive Total Patient Management Experience at the college, teaching and overseeing students in costume design, moulage makeup, choreography and stage management for the enactment of medical emergencies for the event which serves as a capstone for future paramedicine professionals. She is also working with the costume shop to prepare for the college’s mainstage production of “Peter and the Starcatcher” opening April 29 at the MCC Theatre. For more information on the performance visit mesacc.edu/arts. 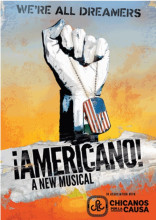