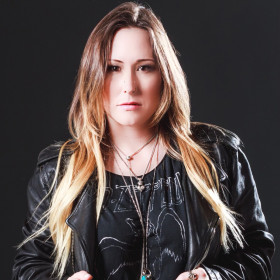 Being a radio host for SiriusXM isn’t exactly what she planned on doing, but according to Mesa Community College (MCC) Alumna Shannon Gunz, it is proof that life can surprise you with a fun and rewarding career.

An Arizona native, Shannon was born in Prescott and grew up in Chino Valley. She grew up close to her family, loving music, the outdoors and driving a stick shift. As a young adult, she moved to the Phoenix area to begin college.

Shannon’s journey at MCC began when she set her sights on an Interior Design degree in 2002. During the course of her studies, an interpersonal communications class changed her focus.

“I really loved looking at the different dynamics of how relationships work, how conversations happen, and how certain people open up,” she said. “At that point, I decided to get a degree in communications.”

While attending classes at MCC, one of Shannon’s roommates told her she thought she’d be a great talk show host due to her outgoing personality and love of music. At that moment, Shannon decided she wanted to pursue a career as on-air talent.

Shannon graduated in 2005 with an Associate of Arts in General Education and transferred to Arizona State University’s Walter Cronkite School of Journalism and Mass Communication. The most exciting part of the new curriculum was securing an internship.

“I remember telling my dad that I wanted to do something really big for that required internship,” she said. “Moving to New York seemed like a natural choice.”

Shannon’s search for an internship led her to Sirius Satellite Radio, now known as SiriusXM, in New York! The internship was a perfect fit, not only because of her dream of becoming a radio host, but also because of her love of rock music. Fast forward a few months and Shannon was driving across the country with an interview on the books.

Her entire experience of being in New York was thrilling and topped off when she learned her interviewers were Steve Covino and Rich Davis, two famous Sirius Satellite Radio personalities and the hosts of The Covino & Rich Show. While waiting for her interview, Shannon realized the familiar-looking woman sitting next to her on the couch was Janet Jackson. She was also waiting to go on air with Covino and Rich! This only added to the excitement of her interview experience in New York. Several days later, she was offered the internship and wholeheartedly accepted.

Interns aren’t typically allowed to be on air their first week, but the novelty of Shannon’s small- town background and her outgoing personality led Covino and Rich to give her a chance

behind the mic. Her Arizona roots appealed to the satellite radio listeners and many formed a connection with her over her experiences growing up in the Southwest.

The internship was going so smoothly that Shannon decided to stay in New York. She transferred to Seton Hall University, where she graduated with her bachelor’s degree in

journalism in 2007. After graduating, she remained employed with SiriusXM and moved around the country a bit, finally settling in Las Vegas.

Shannon has been with SiriusXM for nearly 15 years. During the week she hosts on the Ozzy’s Boneyard and Turbo stations, and on weekends she hosts the Octane station. Before the pandemic she frequented music festivals and concerts -- interviewing artists and sharing her experiences with her listeners. Then, 2020 hit.

With the onset of the COVID-19 pandemic, music production came to a screeching halt, so Shannon had to get creative to find content. Thankfully, in the latter half of 2020, more bands began to quarantine together in order to get back in the studio and start performing virtually.

Shannon’s professional and personal lives both revolve around music. In October 2020, Shannon married Chad Gray, lead vocalist of two bands - Hellyeah and Mudvayne. One of their two French bulldogs, Milly the Metal Dog, has seen Ozzy Osborne perform and met members of Korn and Slipknot. Their second French bulldog, Mad Lee, was adopted during the pandemic and can’t wait for life to go back to normal so he can meet rock stars like his sister.

According to Shannon, students thinking about pursuing a career in radio should be themselves.

“The thing that got me to where I am is being genuine. Hopefully you’re that person people like, and if so, you don’t have to pretend to be someone else,” Shannon said. “People want to feel like they know you and they want someone to hang out with. Be yourself, and be relatable.”