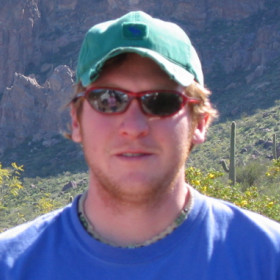 Scott Mackey’s job at the Arizona Game and Fish Department often takes him out into the middle of nowhere. But for Mackey, an avid outdoor enthusiast, that’s exactly where he wants to be.

“The thing I love most about my current job is the hands-on nature of field work,” said Mackey, who is currently performing habitat assessments of potential bighorn sheep transplant sites.  “I spend the majority of my time in the field, collecting data and samples and taking pictures.  I am led to areas I would otherwise never see and I have experienced more of Arizona’s vast landscape than I ever would have on my own.”

The classes Mackey took in MCC’s Life Science Department started Mackey on his career path.  After a half-hearted attempt at majoring in business, Mackey soon discovered his true interests lie in conservation biology.  He became active in MCC’s Environmental Action Club and went on field trips with the Arizona Game and Fish Department, which eventually led to his current job.

“The teachers in the MCC Life Sciences Department provided me with guidance I couldn’t have received anywhere else,” said Mackey, who went on to earn a bachelor’s degree in Conservation Biology from Arizona State University.  “The diversity of the teaching staff offered any biological path I could have chosen—Bonnie Kalison’s forte of oceanic wildlife, Andy Baldwin’s knowledge of herpetology (amphibians and reptiles), and Ron Dinchak’s vast knowledge of desert plant life.  All of these disciplines contributed to my understanding of wildlife biology.”

Mackey’s previous project for Arizona Game and Fish involved the construction and maintenance of two elk-excluding fences around the riparian habitat of Canyon Creek in the Tonto National Forest. The area was burned in the 1990 Dude Fire and due to the abundance of elk in the area, the vegetation was being stunted due to trampling and foraging.  The exclosures protected the sensitive fauna from elk while allowing for the passage of smaller wildlife such as deer, turkey, and eagles to have access to the creek.

Mackey’s future plans involve being an observer on a fishing boat for the National Oceanic and Atmospheric Administration and continuing studies at ASU in applied biological systems.  Mackey keeps in touch with MCC biology instructor Ron Dinchak and traveled to Alaska with Dinchak last summer.

“The opportunities and experiences made possible by the instructors at MCC sparked my interest (in conservation biology) and gave me the contacts to pursue the career I have today,” Mackey said.

This alumni profile first appeared in the Spring 2007 edition of Alumni & Friends, a publication for the Mesa Community College Alumni Association.  http://mesacc.edu/sites/default/files/pages/section/about-mcc/institutional-advancement/communications/Spring07AF.pdf