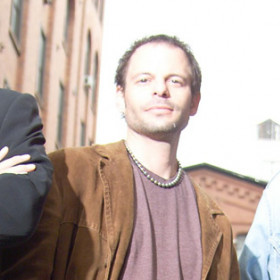 Robin Wilson, lead vocalist for the Gin Blossoms, spent a large part of his youth on the Mesa Community College campus where his father, Lee Wilson, taught accounting from 1971 through the early '90s.

“I have a big place in my heart for that campus,” said Wilson during a phone interview from his tour bus as he promotes the band's latest release, Major Lodge Victory. “I grew up there.  I used to sell popcorn at the football games and I remember running around on campus waiting for my dad to get off work.  My very first job was in the campus cafeteria.”

Wilson was a full time student at the college from 1983-88.  He started out with no clear idea of what he wanted to do, but after a couple of years found his direction—physics.

“I had a life-changing moment one summer,” Wilson said.  “I was never properly encouraged in science, but I rediscovered it on my own on a hiking trip.  It was really the first time I was excited to return to school and sign up for classes.  For the next three years I took virtually every science class MCC had.”

He planned to continue his schooling and get a graduate degree in planetary science, but the Gin Blossoms happened, propelling Wilson and the band to fame in the '90s with hits such as Follow You Down, Hey Jealousy, and Allison Road. The group earned a Grammy nomination for Best Performance by a Duo or Group in 1997.

He calls himself the “Blutarsky” of junior college—a reference to John Belushi's character in Animal House—because he spent five years at MCC and earned no degree.  But he considers it time well spent.

“I walked out of there with a solid basic knowledge of science and I'm glad I learned it,” Wilson said.  “It's where my interest in science grew and I later named my recording studio, Uranus Recording Studio, after my interest in planetary science.”

Today, you can hear echoes of his passion for science in his song lyrics. Wilson said he enjoys the diversity of his life, dividing his time between recording, stage performances, and working with other musicians at his Tempe studio.  His studio work with younger musicians allows him to stay connected to new music and energizes him.

“I'm so privileged to be a singer who is able to support a family at age 42,” Wilson said.  “To be able to do what you love is great.”

Wilson divides his time between Arizona and New York, where his wife, Jenna, is the stage manager for Saturday Night Live.  Their son, Grey, will be starting kindergarten this year, so Wilson may soon be spending more time in New York.  But he calls Arizona home and spends about one week every month here.

Wilson's advice for young musicians or recent graduates?  It comes from the lyrics to a Cheap Trick song:  “Surrender, but don't give yourself away.”

This alumni profile first appeared in the Fall 2007 edition of Alumni & Friends, a publication for the Mesa Community College Alumni Association.  http://www.mesacc.edu/sites/default/files/pages/section/about-mcc/institutional-advancement/communications/A&FFall07.pdf