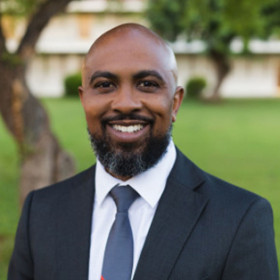 Believing that music has the power to change lives, Marvin Scott has focused his career on connecting kids to the joy and magic of making music, which was his student experience in the Mesa Community College Music Department. Prior to attending MCC, Marvin was enrolled at Arizona State University. In the fall of his freshman year studying in the ASU College of Music, some friends recommended the MCC music program to learn more about his interest in jazz.

“MCC has had a long-standing reputation in the Valley for having a great band program, specifically for jazz music” he explained. “I met the late Grant Wolf at the beginning of
the spring semester. He and Don Bothwell schooled many generations of talented musicians for 35 years at MCC from the 1970s through the early 2000s. After speaking to Grant, I registered for his jazz improvisation class.” By the end of the semester, Marvin was hooked. “I transferred to MCC to study saxophone with Grant and to play in his ensembles. He was an amazing teacher and mentor.”

Marvin attended MCC from 1996-2000, while he worked parttime. “I have so many wonderful memories of being a student in the MCC music program. One of them was going on my first trip to New York City for an international jazz convention.”

Because most of his credits were in music, he spent some time deciding what he wanted to do in that field. Ultimately, he decided to become a teacher and transferred from MCC back to ASU, earning a Bachelor’s degree in Elementary Education in 2004.

It was Wolf who told Marvin about a parttime teaching opportunity with a fledgling charitable organization in Phoenix called Rosie’s House, which would eventually provide him with a path to purposeful work and deep-rooted friendships over the course of his career. The organization, situated in a small home in an economically disadvantaged neighborhood, offered after-school music lessons to children in the area. Marvin was hired to teach saxophone there in 2000, while working part time and attending classes at ASU. After graduation he continued in his faculty position at Rosie’s House, even while teaching in the Phoenix Elementary School District and the Alhambra School District through 2011.

And then he made a life-changing move when friends who taught with him in Phoenix encouraged him to apply for a job at the school where they had recently taught in Istanbul, Turkey. Marvin taught English there for five years.

“Going to Istanbul was my first time living outside Phoenix and traveling outside the United States,” he said. “It was one of the greatest experiences of my life.”

Returning to Phoenix, Marvin taught in the Pendergast School District and worked as a program manager for the Boys & Girls Clubs of Metro Phoenix. But then in 2019, Rosie’s House needed a program and community engagement director and Marvin returned to the place where he first connected kids to music.

“It’s such a sincere and welcoming environment. I feel very connected to the kids and the mission of service to the community, which has never wavered,” he added. “Rosie’s House offers students opportunities to participate in music that they would not ordinarily have had on their own, and it paves pathways for students to achieve success and reach their full creative and personal potential.”

The Phoenix native said, “MCC gave me a strong foundation as a musician and helped me make critical and lasting connections with other musicians and with job opportunities in Phoenix, specifically with Rosie’s House to teach saxophone. I love being able to create opportunities for students to have positive and meaningful experiences in music and for parents to get joy from seeing their children achieve success.”