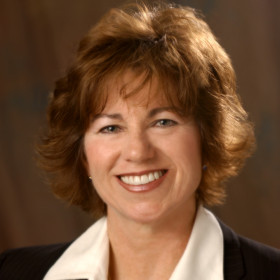 MedAire founder and CEO Joan Sullivan Garrett, who began her career with a nursing degree from Mesa Community College in 1978, is today a recognized leader committed to providing emergency medical care to people in remote locations throughout the world.

Her company is credited with establishing the world's first global emergency response center dedicated to providing immediate, real-time medical assistance to more than 2,000 clients worldwide.  Each month, MedAire’s Global Emergency Response Centers manage more than 4,000 medical cases in all corners of the globe – on land, at sea or in the air.

She's come a long way from her days as an MCC student and single mother to two young sons.  Joan, who comes from a family of nurses, enrolled in MCC after researching other local nursing programs.

“The program had a great reputation and an excellent focus on clinical work,” Joan said.  “It was great preparation in giving me the confidence to pursue anything in the field of nursing.”

The idea to develop her own company came when Joan, who was employed as a critical care registered flight nurse, recognized the need for remote medical assistance after assisting a seriously injured eight-year-old boy in a remote desert area.

Joan started MedAire in 1986 and successfully grew the company based on three factors—education, equipment and expertise.  20 years later, MedAire is an international company and a leading force in providing medical safety services to the aviation industry.

Joan won the Ernst and Young's Entrepreneur of the Year Award in 2001 and serves on the Board of Governors for the Flight Safety Foundation.  She consults with the US Federal Aviation Administration, has provided congressional testimony, and was awarded the Business Aviation Meritorious Service Award.  Joan's goal for MedAire's future is to expand into other areas that have a need.

Joan said her associate degree has provided her with many opportunities and the lack of a bachelor's degree in nursing has not been an obstacle.  She stresses the importance of education and tells other young women about the rewards of those extensive “18 hour days” she experienced as a young mother establishing a career.

“There are a lot of young women who are struggling to overcome obstacles and make a living,” Joan said.  “Nursing is a phenomenal way to do that.”

This alumni profile first appeared in the Summer 2007 edition of Alumni & Friends, a publication for the Mesa Community College Alumni Association.  http://mesacc.edu/sites/default/files/pages/section/about-mcc/institutional-advancement/communications/AFSummer07.pdf