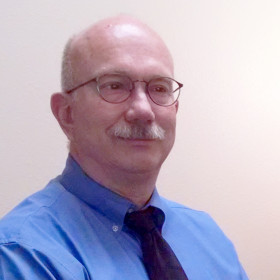 For most of us, the phrase “path of least resistance” probably does not include studying Psychology at a major university and advanced courses in science and math on the way to Optometry school.

But most of us are not MCC alumnus Dr. James Abbott, who came home to open his Optometry practice in Mesa 35 years ago.

“I started at MCC in the summer of 1972, and received my Associate of Arts degree in 1974,” James said. He transferred to the University of Arizona, and graduated in December of 1975 with a Bachelor of Arts degree in Psychology. “I was more interested in psychology as a major, and I picked up my chemistry, math and other sciences at MCC,” he said. “The way I went was the path of least resistance: I acquired my pre-requisites for optometry school at MCC.” James studied at the Southern California College of Optometry from 1976 to 1980, graduating with a Doctor of Optometry degree.

James received his full Optometry license in September of 1980. “I’ve been back in Mesa the whole time,” he said of his time since then. “I grew up here and still have family ties here, and after I graduated it was still a nice place to come back to. I’ve built a successful practice here over the last 35 years.”

James said his time in MCC’s student government, men’s honorary, and marching band were his fondest memories. “Working with administrators and learning about various issues that they wanted student input on was fascinating,” he said of his work in student government.

“I still look fondly on what I did at MCC,” James concluded. “It served me well for the classes I took later in my academic career.”

Calling MCC a “good stepping stone to higher education,” James said he recognized the advantages of staying home to pursue his education. “I wanted to be near home rather than face the total expenses of living on a campus somewhere else,” he said. “MCC gave me an opportunity to start college and still not have as many expenses. My goal was to go beyond to the university, but for some students two years is enough, depending on their field.”

Regarding MCC's future, James said working with local business and industry to ensure that graduates have real world skills will continue to be important. “I’d like to see the college expand their communication with business and industry,” he said. “We need to look ahead and not just respond as issues appear, and we can’t anticipate some of those changes without communicating with the real world outside and seeing what the workforce needs.”

Though other family members went straight to a university from high school, James is still glad he started at MCC.

“For me, MCC was a good choice,” he said. “My wife Linda is also an MCC alum. My son Jay went straight to the UofA and did well, but it’s not for everybody. I’m very positive about my experience at MCC. They definitely offer a bridge for those students who have a need to be home for economic reasons, or they can only attend part-time. When I was a student the night school at MCC had as many students as day classes, so it is an important part of the community.”