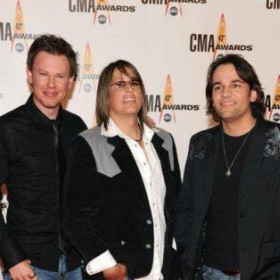 Mesa Community College alumnus Brad Hull recently experienced the thrill of walking the red carpet at the Country Music Awards as a member of the country trio Due West.

Hull, who began his career in music at MCC, said he and his band had a hard time believing they were at the awards show as artists, not just fans.

“To be on the other side was surreal,” Hull said.  “We have all been big fans for a long time and we always watched the show on TV and talked about the winners. That night I still felt more like a fan than an artist.”

Hull graduated from MCC in 2000 with an associate degree in general studies.  He said a music business class he took at MCC with instructor Grant Wolf helped him begin to define what he wanted to do in the music business.

“Grant Wolf was an incredible teacher,” Hull said.  “He knew the music business really well and was very entertaining as a teacher.  I always knew I wanted to do something in the music business but he opened my eyes to all the options and different careers.”

While in Mesa, Hull met fellow Due West member Matt Lopez. Hull transferred to Belmont University in Nashville where he graduated with a bachelor’s degree in business administration in 2002. Lopez followed Hull to Nashville where the two met the final member of the Due West trio, Tim Gates.

“When we met Tim, we knew we had found the right voice,” Hull said.

The group was off and running, releasing their first hit single, “I Get That All the Time” to radio at the end of April 2009.  Fans responded to the sincere, down-to-earth lyrics and three-part harmony immediately.  The song reached #17 on the Music Row Country Breakout Chart and the video was in the GAC Top 20 Countdown for 8 weeks, peaking at #3.

“Each holds a special place in my heart,” Hull said. “Songwriting is the closest thing to creating something.  I don’t have kids yet, so my songs are my kids.”

Hull said the group plans to release a new single and a new CD this spring.  Information on the band can be found at http://duewest.com/.

This alumni profile first appeared in the Spring 2010 edition of Alumni & Friends, a publication for the Mesa Community College Alumni Association.  http://mesacc.edu/sites/default/files/pages/section/about-mcc/institutional-advancement/communications/spring_2010.pdf