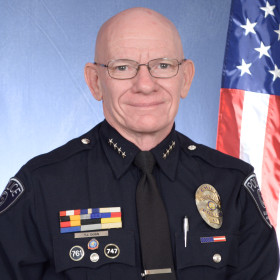 Timothy Dorn began his highly decorated military and law enforcement career at MCC in 1975 as a security officer. His talent was recognized early in his career, when he was honored as the 1976 Gilbert Police Officer of the Year and 1978 MCSO Deputy Sheriff of the Year. He rose to the rank of captain with the Maricopa County Sheriff’s Office, and in 2001 returned to the Gilbert Police Department where he became chief of police in 2005. Awards and decorations over his more than 40 years of police service include four time recipient of the MCSO Meritorious Unit Citation, Gilbert Police Department Meritorious Conduct Award, Distinguished Service Award, and Lifesaving Medal. Recently he was honored with the Employer Support of Guard and Reserve Patriot Award, and the Gilbert Community of Excellence Public Service Award.

In addition to his associate degree from MCC, Timothy holds a bachelor’s from Northern Arizona University, and master’s degree from the American Military University. In 1993, he completed the FBI National Academy 175th Session. Timothy’s work ethic reflects his personal values of selfless service, honor, integrity, professionalism and patriotism.