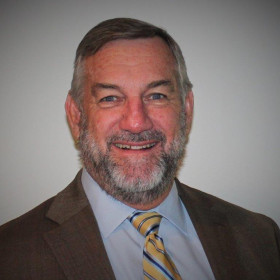 Robert is a US Marine Corps Vietnam veteran who earned the National Defense Service Medal. In college, Robert Klee was as formidable on the gridiron as in the classroom. This linebacker was one of the MCC 1974 Wool Bowl Champions, the 1975 MCC National Junior College Athletic Association Champion and a national NAIA defensive player of the week at Southern Utah State College. In 1978, he achieved the recognition of being the Rocky Mountain Athletic Conference Scholar Athlete of the Year.

MCC football teammate and 2016 MCC Hall of Fame awardee Bland Burchett said his first intimidating, head-to-head meeting on the field of play with Robert left him looking through the ear hole of his helmet. He still describes it as one of the best encounters of his life as fear turned to respect and lessons learned about confidence, setting goals and leadership grew into more than three decades of friendship and professional camaraderie.

As a leader in the Arizona education community, Robert retired last year having spent nearly 40 years researching, writing and advocating for year-round education and serving as president of the Arizona Association of Year-Round Education from 1997-2000. He received the 1996 Pioneer Award from the National Association for Year-Round Education, the 1997 Outstanding Educator Award from the University of Arizona and the 2017 June Pallack Excellence in Education Outstanding Leadership Award. His service to the city of Yuma, which began in 2004, includes leadership within business, civic, community and educational organizations.