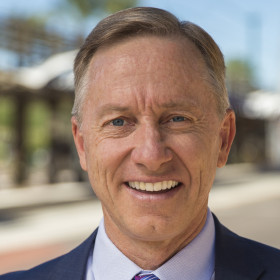 John Giles was named Mesa Man of the Year in 2013. John Giles has served on, and often led, more than 20 boards and committees in Mesa and the surrounding community, including the Phoenix-Mesa Gateway Airport Authority. Most notably, he has served on the Mesa United Way Board of Directors for more than 15 years, which includes terms as board chair and campaign chair. Involved in interfaith relations throughout the Phoenix area, John serves on the Board of the Arizona Interfaith Movement for nine years and as chair of the Golden Rule Banquet.

John Giles was elected the 40th Mayor of Mesa, Arizona in August 2014. His NextMesa vision has added thousands of new jobs, employers like Apple and Textron Aviation, and more the $1.5 billion in capital investment. He is bringing renewed focus and attention to Mesa’s downtown resulting in a budding, creative economy with new businesses and entertainment options. In March 2015 he joined the Mayor’s Challenge to end Veterans Homelessness that resulted in Mesa’s program housing more than 70 homeless veterans by the year’s end. Recognizing these efforts and more, Money magazine, a subsidiary of Time Magazine, named Mesa the best big city in the Southwest.

John holds a bachelor’s degree in political science from Brigham Young University and a juris doctorate from Arizona State University’s Sandra Day O’Connor College of Law. He has managed his own law firm in downtown Mesa for more than 20 years.

John is an active marathoner and triathlete who has completed two full Ironman competitions, 20 marathons and four Boston Marathons.