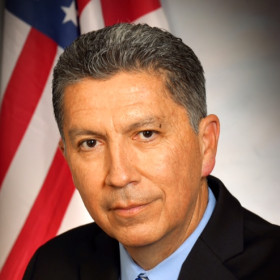 Gilbert Orrantia is the Director of Arizona’s Department of Homeland Security. An Arizona native, he was raised in Mesa, graduated from MCC in 1978 and, after earning a Bachelor of Science in Education from Arizona State University, he taught junior high in the Mesa Public Schools for two years.

He left the halls of education to serve in the FBI for 26 years, receiving two of the highest commendations granted by the agency – the Medal of Valor and FBI Star – for his role in the legendary 1986 Miami Shootout, still today known as the deadliest firefight in FBI history. Gilbert has lectured to members of the FBI Academy on officer safety and survival.

His national and global perspective on counterterrorism has been gained from in-depth experience including the supervision of an FBI counterterrorism squad in Phoenix and eight years as a Supervisory Special Agent. For four years he helped lead the FBI’s Joint Terrorism Task Force in Phoenix, located in the Arizona Counter Terrorism Information Center.

Recognized as an expert in investigations of terrorism, drugs, and violent crimes, he has served on a multitude of task forces, councils, and advisory groups. He serves as Co-Chairman of the Governor’s Arizona Human Trafficking Council, Co-Chair of the Arizona Mexico Commission Security Committee, and Chairman of Operation Stonegarden, which is a U.S. Department of Homeland Security grant program under the operational control of Customs and Border Protection.