Being Human (A Two-Person Solo Show): Shachi Kale: Conversations with Myself & Swapna Das: Encountering the Self 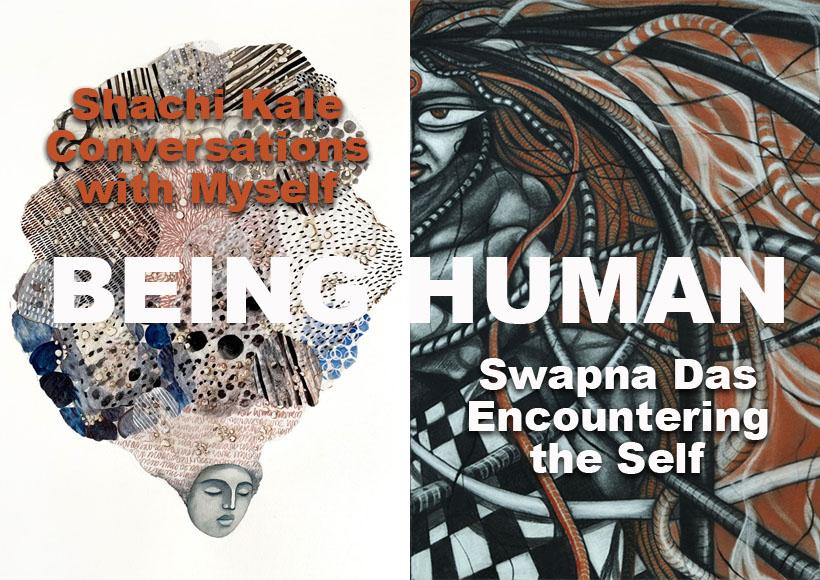 Shachi Kale: Conversations With Myself

Shachi Kale is a visual story teller whose images are personal, poetic and rich in symbolism. Whether reappropriating stories from western fairy tales, imagery from her native country of India, or inventing new myths to talk about her present concerns, Kale’s work is centered around the journey of personal growth and spiritual development. In the past, this has taken the form of honoring her heritage even as she moved between cultures, all the while becoming an acute cartographer of the human condition. Most importantly however, is the way that Kale uses all of these motifs to create a sacred space of reflection in a world of endless distractions.

With her newest body of work, entitled Conversations with Myself, Kale examines the complexity of identity through the intimations provided for by figures from her own unconscious. This allows Kale to unearth the deeper connections that exist between the inner world of personal experience and a sudden return to interacting with the world outside. As a response to the effects of the pandemic, feelings of anxiety, grief, despair, hope, optimism and healing have all come to play a more significant role in Kale’s iconography. Working with gouche, watercolor, acrylic, fiber, beads, flowers, clay and burnt paper allows Kale to connect to the multifaceted nature of her own insights about how much the world has changed in such a short period of time and will inevitably continue to change in the years ahead.

As a multimedia artist and illustrator Kale also incorporates video, digital manipulation and other forms of technology into her works in order to touch on the complex patterns of understanding that issue from addressing such a broad range of ideas. Transnational in her outlook and a syncretist by nature, Kale manages to touch on those elements that are germane to all of human experience. For all of these reasons and many more, her work in Conversations with Myself represents nothing less than an emotional journey through a tumultuous period of history. That is Kale’s enduring contribution not just to contemporary art, but to how the creative spirit can help us to engage with the world around us in both a more meaningful and heartful manner.

Bio: Born and brought up in Mumbai, India, Shachi Kale trained as a graphic designer and began her career in advertising. She successfully ran her own design studio in Mumbai till 2001 and then made the move to Arizona with her husband. She has made Arizona her home for over 20 years. The move inspired Shachi to express herself through art as a way to grapple with the feelings of change, loss of identity and regrowth. Her art centers around her journey, her internal dialogue and the desert environment she now lives in. Shachi has recently had several successful solo and group shows in Arizona. She has shown her art at the Chandler Center for the Arts, Tempe Center for the Arts and through Scottsdale Public Arts and the City of Chandler. In 2019, her art was selected for the 2019 Governor’s Arts Awards, and she was a finalist for the Dr. Eugene Grigsby Visual Artist Award, at the Phoenix Mayor’s Arts Awards. In addition to her active art practice, she continues to also work as a designer and has won awards for her designs and art over the years. She has illustrated 16 children‘s books, which have been published in both India and the U.S. She and her husband live in Arizona with their two young boys and dog, Buzz. Her primary medium is watercolor, but she also works with mixed-media, gouache, acrylics, oils, fiber arts, print-making and digital art.

Swapna Das: Encountering the Self

The work of Swapna Das represents an evolving journey of self-exploration that resonates with many different spiritual traditions. The most prominent among these is Buddhism, which describes ten different states in the cycle of life that one can encounter throughout all of worldly existence. Whether thought of separate stages or states that are enfolded into one another, these ten worlds include six lower realms and four higher ones that lead to the path of Buddhahood. Thus, in Das’s art, you will see interwoven motifs that are reflected in each and every state, ultimately pointing to the perpetual transformation of human perception, depending on the level of awareness and being that one aspires too.

Das often uses a limited pallet where color functions as an accent that helps to direct the viewer toward archetypal figures and forms that exist in a realm beyond the visible world. Whether rendered in charcoal or ceramics, her motifs undulate, animate and reach out toward the viewer in unexpected ways. Both dynamic and daring, Das’s compositions are comprised of moments of peace and conflict as well as the wider spectrum of spiritual states that one can attain. Meant to be a mirror of the physical realm, the metaphysics of existence are dramatized in Das’s work in new and imaginative ways that help us to reflect on our own inner states, from the lowest conditions of attachment to the highest forms of enlightenment.

Most importantly, the journey that is pictured in her work is one that is as personal as it is universal. This is because the ten worlds of Buddhism are not processional, but something that one can experience at any given moment in time. This doesn’t make them cyclical however, but something more akin to metaphysical presuppositions about the bounds of fate and the effects of karma. Deeply intertwined with notions about ethical acts and actions, the motives behind Das’s work seek to reunite us with a deeper understanding of the world we inhabit together. This is the unique contribution of her artistic practice, which questions the values of the secular-scientific worldview by pointing to a much broader notion not only of what animates life, but also to what makes life worth living.

Bio: Swapna Das is a visual Artist (Painting/ Drawing), currently living in Phoenix, Arizona. She was born and raised in New Delhi, India where she did her Bachelor of Fine Arts and later worked as an freelance artist. After moving to USA in 2011, she studied Master of Fine Arts (MFA) at Arizona State University (ASU) which offered her a new dimension in life.  It also allowed her to share her diverse background through art while enhancing the skills and knowledge through meaningful interaction with talented artists in the valley. After her graduation from ASU, she has been working as an adjunct faculty at ASU and MCC. Swapna Das has also been actively participating and showcasing her artwork around the valley since 2013. She was featured in YabYum music+arts in 2017. Her Thesis Exhibition “Ten Worlds” featured in The State Press on 03/ 28/2016. She was also invited to attend Visual Artists and Writers Residency at Vermont Studio Center in 2016. Her charcoal drawings were showcased in Arizona Biennial 2018 exhibition in Tuscon Museum of Art and History. She has exhibited her at Blue Door Art Center in New York in 2017. She has also travelled to China for Inverse Conversation Exchange Exhibition with Renmin University of China in 2016. She is currently teaching 2D Design and Drawing I at Mesa Community College.