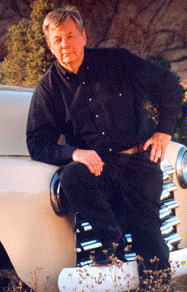 The Paul A. Elsner Library and High Technology Complex was dedicated to ex-Chancellor Paul A. Elsner, who during his 22-year tenure as leader of one of the largest school districts in the nation, maintained a strong dedication to instructional technology and the use of information technology to equalize education. Now on early retirement, Elsner is directing the National Center for the future of the Community College.

Paul A. Elsner served as Chancellor of the Maricopa County Community College District in Arizona from 1977 until 1999. He received his doctorate from Stanford University in 1964 and graduated from Harvard’s Institute for Educational Management. Throughout his career as professor and administrator, Elsner served in various capacities for organizations such as Educational Testing Service, American Association of Community Colleges, American Council on International Intercultural Education, League for Innovation, and Campus Compact.

Among his many awards are the Anderson Medal for co-founding “The Think Tank,” the AACC Community Colleges’ Leadership Award, and the Harold W. McGraw, Jr. Prize in Education. The Chronicle of Higher Education and Change Magazine named him as one of the most influential college leaders of our time. His publications include articles, books, and even a morality play on the future of higher education.

His current efforts to advance the cause of education have led him to speaking engagements on six continents. In his retirement, he is founder and president of the Sedona Conferences and Conversations, Paul Elsner and Associates, and Los Vientos, Inc.—organizations dedicated to worldwide education.