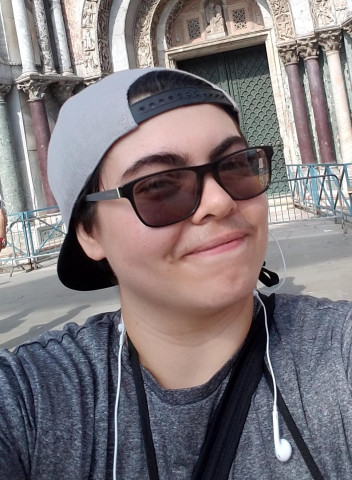 Wallace ,who prefers to be called Blitzen (German for lightning), or Charboday (a combination of family names), is transgender and transitioning to male. He has nothing but praise for his overall experience at MCC.

“It was amazing. The faculty was great, and everyone was there to help,” he said.

Wallace works in the MCC science lab as a lab assistant where he helps set up and take down labs, takes care of animals, works events and assists with culturing. He intends to continue working at the MCC lab after graduation.

“He’s an impressive student and one of the most remarkable students I have ever met,” Emily Dimson, MCC science lab coordinator said. “He has had so much stacked against him; it still amazes me he is here in college. He is not only the first in his family to graduate from college but is graduating with four MCC degrees.”

Wallace’s advice to other MCC students is to get involved in student life and clubs. Some of his favorite clubs are Phi Theta Kappa, LGBTQ Club and the multicultural club -- all had major impacts on his MCC experience.

“Talk to the teachers and get to know fellow students,” he said. “When I went out and sought other people and joined clubs, it really helped me get a job, do undergraduate research and network.”

Wallace is already taking classes at Arizona State University and plans to obtain a bachelor’s degree in microbiology. He is pursuing a career as a virologist, specifically working with oncolytic virus, which are viruses that preferentially infect and kill cancer cells.

“When I was young, I was fascinated with viruses. It was intriguing to me that something not considered to be alive can cause such damage to people. I want to help others.”