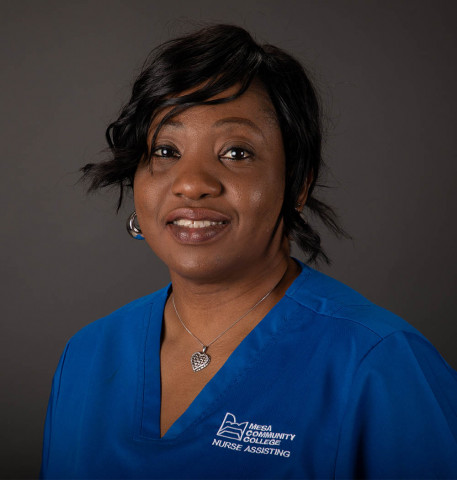 Njideka Nwalor - International student finds success at MCC in Nurse Assisting Program her late 30s, Njideka “NJ” Nwalor found herself a widow with three young boys. Emigrating from Nigeria 19 years ago, she moved to Canada to be with her husband, who was a student there. He passed away  in 2010 and, with two of the boys growing into teenagers, NJ moved to the East Valley in 2017 to be closer to family living in Gilbert.

“I decided to be a nurse to provide for my family and be a role model for my boys. I want them to be proud of me. People thought because I was in my 40s and a single mother, everything was against me succeeding, but I am showing them they were wrong,” NJ said.

NJ started out taking core college classes at Chandler-Gilbert Community College and, as many nursing hopefuls do, decided to pursue certification as nursing assistant at MCC, while waiting to get into a Registered Nurse program. Also, she planned to use the knowledge from the NA program to improve her caregiving skills as she helped her aging parents.

“I heard Mesa Community College offered the Nurse Assisting Program and that the instructors at the college care about students succeeding,” said NJ. “The way the program is taught, you learn this is more than a job, it is a beautiful chance to be part of something good. The program was so much more than I expected. I loved it.”

"NJ shows up to class prepared with a smile every single week,” said MCC Nurse Assisting Program instructor Nicole Bartreau. “I love her enthusiasm, which is contagious for other students. I can see that she is a strong woman and mother. She often talks about setting an example of success for her sons. I am proud she is entering the health care field; she will be a great nurse assistant and a great nurse someday."

In addition to the academic and medical knowledge of care, NJ says the program is about learning the techniques of compassion in care and how to respect the dignity of those you are assisting. She pointed out she already puts the skills she’s learned into practice. NJ shared that her father now needs physical assistance, which was causing conflict because he still wants and needs to be acknowledged as the man of the house, and not be told what to do. She explained the program taught her the language of respectful care, which focuses on empowering patients by giving them choices.

“Once we stopped telling him to do things like get dressed and instead offered selections of what he might want to wear or asked when and what he might like to eat, it changed how we all were talking and feeling,” said NJ.

Six weeks before the end of the Nurse Assisting Program, NJ began the intern phase of the program at a long-term care facility. She says the opportunity was exciting and offered a chance to put what is learned in action and to network with potential employers.

Just before graduation NJ received the news that she is one of a select number of Maricopa Community Colleges nursing students who have been accepted into the Concurrent Enrollment Program (CEP), meaning she will be attending MCC and Grand Canyon University simultaneously in the fall. This offers the opportunity for NJ to earn her Associate in Applied Science (AAS) in Nursing from MCC at the same time as she earns a Bachelor of Science (BSN) in Nursing from GCU.

For students considering the Nurse Assisting Program, NJ advises, “Come in with an open heart and be willing to learn new things about this caring profession. MCC has the best instructors who want to see you succeed.”