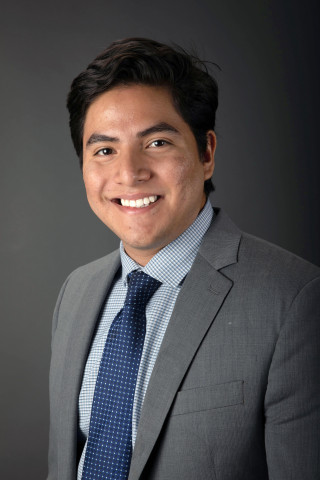 Ivan Quintana  - Associate in Arts; Arizona General Education Curriculum Growing up, Ivan Quintana knew all his neighbors in the small town of Colonia Juárez, Mexico. After all, the town, set in a lush valley in the mountains near Mexico City, only had about 400 residents. It’s that look-out-for-one-another attitude that now has him preparing for a career as a lawyer and a legacy in community service.

Quintana aspires to become a leader and voice for the Hispanic community. After graduating from MCC in Spring 2019, he plans to transfer to Arizona State University to pursue a bachelor’s degree in criminology and criminal justice and continue to an Ivy League law school to earn a Juris Doctor degree.

He came to the U.S. when he was 18 to get to know his father better (his parents split when he was 10) and to attend college. He had initially planned to attend the University of Texas in El Paso, Texas with his two brothers, but chose MCC because of its reputation and lesser tuition cost.

Hailing from a small town, life in the big city was a little different.

“In Mexico, I lived in a town of 400 or so people. It’s the kind of place where everyone knows each other,” he says. “Having a small-town mentality is something I carry with me always and helps me see there’s an individual behind every statistic or person struggling and encourages me to give back.”

Quintana has had many positive influences during his time at MCC. Professor Mark Yoshimura with the MCC Administration of Justice department, stressed the importance of community service.

“He encouraged me to look at community service not only as a way to do good, but also as a way to build relationships with others and network,” Quintana says. “His was the first class I had taken after a two-year break after high school. The way he teaches is exciting and it made me fall in love with school all over again.”

Professor Duane Oakes, faculty director of MCC’s Center for Community & Civic Engagement, also had an impact on Quintana’s academic experience.  “ When I first met him, he saw something in me and helped me discover it. That was inspiring.

Monica Margaillan, MCC’s Community Outreach Coordinator, was looking for someone to be a College Completion Ambassador through AmeriCorps, says Quintana, and immediately offered him the position after a brief meeting.

“At the time I was really looking for a leadership opportunity since I hadn’t had one since high school. She gave me that opportunity and placed a lot of trust and responsibility in me,” he says. “That helped me get my confidence back, knowing I could be a leader.”

As an ambassador, Quintana helped implement a ‘College Starts Now’ program to motivate and prepare incoming high school students for college and career readiness, as well as returning adult students to sign up for GED and English language courses.

But it was at a Feed My Starving Children event that he volunteered with Phi Theta Kappa, where he really found his place.

“I felt like something was missing in my life. I feel so happy and accomplished when I’m volunteering and am proud to make a positive impact on others.”

Quintana initially thought about transferring to Northern Arizona University but choose ASU for its Next Generation Service Corp program. The program is the first of its kind, a four-year leadership development program that trains students from all majors to experience firsthand how collaboration among the public, private, nonprofit and military sectors can create meaningful change locally and globally.

Quintana hopes to one day open a legal resource center in a community where people of all backgrounds and income levels are welcomed and where they aren’t afraid to speak to someone.

“When you receive education it’s a privilege and an opportunity, but at the same times it a responsibility and a duty. I think with an education, you’re not only supposed to make your life better, but other people’s lives be better. I feel like I could be a voice for the Hispanic community. Legal representation should not be based on the number of zeros you can write on a check but be based on the person you are.”

Quintana has valued his time at MCC and feels like it has shaped his future goals.

“I feel like if you don’t help people, you don’t really do much with your life. If I can make an impact in other people’s lives, I know that part of me will live through them. I think that’s what a legacy is all about.”

Learn more about the Associate in Arizona General Education Curriculum.