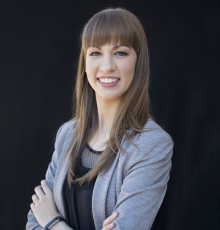 Hannah Somerville has distinguished herself through service. Her passion for volunteering started at the age of six when she coordinated a “Pennies for Stuffed Animals’’ drive for sick children. Fast forward to March of 2017, Somerville has logged more than 300 hours of community service in the last 2 years.

In March of this year, under the leadership of Sigma Chi Eta, she helped facilitate a Dr. Seuss birthday party for more than 215 homeless and underprivileged children. Additionally, Somerville published a short story titled “Volunteerism in Modern-Day America” in the 2014 Creative Communication book.

Growing up in Mesa, Hannah was home schooled and had a career as an equestrian jumper for over seven years. At the age of 17, Hannah was dual enrolled as she came to the MCC Red Mountain campus.

“My first semester was tough,” said Somerville. “I’m one of those people that puts too much on their plate and tries to juggle it.”

Somerville served as vice president of the Sigma Chi Eta, Upsilon chapter, which is MCC’s award-winning national communication honor society. She received the Outstanding Communication Student Award for her impressive academic and service performance and twice has received the Presidential Scholarship and Service Scholarship.

Hannah credits her success to her mother and a strong support system. She also mentions how amazing her professors have been at MCC Red Mountain, particularly Dr. Puvana Ganesan.

“She’s wonderful, been my professor since my first semester, and I’ve had her every semester since,” Somerville said. Ganesan, along with her support system, has inspired Hannah to be the best.

Not only will Somerville be graduating, she will also be a keynote speaker.  She describes her upcoming endeavor as a little terrifying.

“I hope to represent MCC well, it’s a definite honor.”

Somerville will continue her studies toward a bachelor’s degree in technical communication at Arizona State University. She hopes to someday travel around the world and write.