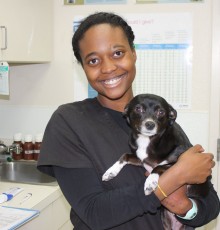 “When the power of love is greater than the love of the power, the world would know peace,” is a code Alexis Reid lives by every day.

Alexis Reid’s passion for animals started at a young age growing up in Beaufort, South Carolina.

At first, she wanted to be a firefighter and then thought about the military. Now she is studying to be a veterinary technician at Mesa Community College.

“I always grew up around animals,” she said. “We had dogs, cats, fish and a huge yard.”

Her favorite show was Animal Cops. Little did she know that she would be working with animals when she grew up. Reid moved from Beaufort to Akron, Ohio and graduated from Ohdela Online High School in 2011. After high school, she and her family packed their bags and headed west for the Valley of the Sun. Originally, they were just going to visit, but fell in love with the weather and the opportunities to go to school.

Reid spent the first year and a half trying to figure out what she wanted to do with her life. She considered going into the military, but realized the commitment would keep her away from her family. Then she had a revelation.

“I felt I needed to be in school,” she said. “I felt like I was stuck at first.”

Reid considered her options, and after some thought she decided she wanted to be a veterinary technician.  In the fall of 2014, Reid enrolled in ANS110, Introduction to Animal Science, at MCC. This course gave her a blueprint of what the MCC Veterinary Technology program had to offer. After the completion of the course, it hit her. She was hooked.

Reid originally chose MCC due to the convenience of the location and the Veterinary Technology program.

“It’s challenging and it teaches you time management,” Reid said. “Mentally, it’s been a challenge, juggling school and work.”

In the fall of 2015, Reid landed an internship at the Gilbert Veterinarian Hospital. When the semester was over, they offered her a job because of the impression she made.

“I have an amazing group of people supporting me through this college journey,” she said.

Reid credits her instructors, Diana Catherine Lehigh and Dr. Kimberly Focht, for her continued success. Her older brother, Robert, pushed her to pursue an education and taught a strong sense of value which she translates to the workplace and the classroom. Her co-workers, some of whom are products of MCC’s Veterinary Technology program, inspire her.

Reid’s advice to anyone interested in pursuing a career in the veterinary program is to work hard and don’t think it’s going to be an easy ride.

Upon completion of the Veterinary Technology program, Reid plans to take a break from school. She said she likes Arizona, but hasn’t ruled out a return back east to work where she grew up. She eventually wants to become more specialized and create more opportunities for herself in the veterinary field.