From a Small Village in Mexico, the World Became a Stage 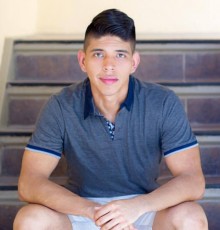 Emigdio Arredondo - Associate in Arts Degree In his tiny village in Mexico, Emigdio Arredondo took his cues from family, from his musician uncles to his dancing mother. But opportunities for his creative side were few in a rural town of about 1,000.

“I thought about life after I was grown and I saw myself following my uncles’ and my grandpa’s footsteps. Farming in our small town seemed like my only option, but I respected and appreciated the life I had,” said Arredondo, who will graduate from Mesa Community College this spring. “I grew up admiring dancers, I would see them on television and movies, but I didn’t have many opportunities to pursue such things in my small town.”

That changed when Arredondo was 14 and his immediate family moved to Mesa in 2008. He immersed himself in the English language and attended Mesa High School, where he signed up for a Hip Hop Dance class as an elective. When he arrived there were 55 girls and only two other boys in the class. He nearly dropped the course until a classmate encouraged him to stay.

“When I came here I had no training, I always thought about professional dancing, but to me dancing had always been social, not professional,” Arredondo said. “That class helped developed my confidence and my choreography skills, which is one of the things I’m passionate about.”

Still, when it was time to attend college, he chose MCC because it was close to home and affordable. Thinking dance was still a dream, he believed psychology or computer science would be a more practical major field of study.

“I still didn’t see dance as a career for me, all I knew was what I learned in high school” he said. “I had never taken a formal dance class. I thought it would be a hobby.”

Arredondo took a jazz class from Tina Rangel and eventually joined the MCC Dance Company. After dancing in the company for a couple of years, he changed his major.

“I love the faculty here, they’ve helped me in so many ways,” Arredondo said. “They’re key to where I’m at right now. Tina Rangel has given me so many opportunities, and I wouldn’t be here without the people around me. I’ve learned life lessons, made friends, and learned how to network.”

Arredondo has developed his dance skills at MCC, so much so that the University of Arizona has accepted him into their renowned dance program after three visits and two auditions.

“I knew the UofA had one of the top dance programs in the country, and I’ve been there with the company three times for dance conferences,” he said. “I fell in love with the university, but I still felt my dream of dancing was far-fetched.”

Arredondo auditioned for the University of Arizona’s School of Dance in the fall of 2015 and got a rejection letter after failing to complete the application requirements. He decided to audition a second time in January of this year. This time he got an acceptance call two weeks after the audition. He was among the 25 to 30 dancers selected from a field of more than 600 dancers that auditioned throughout the entire year.

“After the University of Arizona, I would love to audition for professional companies, train, learn, perform and eventually come back to teach and share my choreography,” Arredondo said of his future plans. “I’d like to teach like my dance director, Tina Rangel, at a college or university, or open my own studio. I’d like to improve opportunities for Latinos for studio work and traveling companies, and I’d love to incorporate my culture into craft.”

Arredondo said his success has a “bittersweet” feeling because of all of his relatives remaining in Mexico. “I do this for all of them,” he said. “They didn’t have the same opportunities. They are all so talented, but unfortunately there’s no way for them to explore their potential. So I’m happy to have come so far and be able to share this with them. I know they are happy for me and proud of me.” His immediate family here is also very proud of him but also sad because he will be moving away. “My parents and my sister have sacrificed so much for me. I can’t even begin to describe how incredibly grateful I am.”

“It took a while for me to accept my passion, and I don’t think I would have done it so quickly and effectively without MCC,” he said. “I was given the foundation, I was allowed to develop at my own pace, and now I feel ready for my next step which is the UofA.”