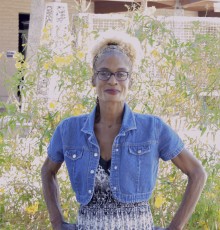 A former cosmetologist who had to give up her business because she could no longer stand, Angela suffers from rheumatoid arthritis, hypoglycemia, neuropathy, and other ailments, including a failing right kidney.

Angela lived in Seattle for 16 years as a mail clerk before a pair of hernia surgeries ended her career with the United States Postal Service. The cold weather also presented problems for her arthritis. She eventually moved to Arizona and switched to cosmetology before that too became too physically challenging.

“I moved to Arizona for the weather and was doing hair,” she said, “but I didn’t know what I wanted to do. I needed to support myself.”

Angela networked with the Fresh Start Foundation, a partner with Goodwill Works. “They asked me if I wanted to go to school or for job training, and I told them I wanted to get a degree,” she said. “Because of my disability I couldn’t stand, so I had to go through vocational rehab first so I could get more help. It paid for my school, my tuition and books at MCC.”

Angela started at MCC in August of 2012. She will receive an Associate of Arts degree in social work from MCC in 2016. “It took me a little longer, I had surgeries and had to take summers off, but I fulfilled my AGEC requirements.”

Financial independence is one of Angela’s goals, and she said she soon realized it would take a college degree to get the kind of job she could manage physically. “In this day and time, if you’re looking at jobs, they are requiring you to have a degree,” Angela said. “I need to take care of myself financially, a professional title, and because I use public transportation, it needs to be something with a normal Monday through Friday schedule.”

Her program of study is social work, which she hopes will not only give her a manageable work environment, but allow her to give back to the community, she said.

“I chose social work because I want to give to my community in a positive way,” Angela said. “And MCC has helped me all the way, stood by my side the whole time with accommodations, counseling, mentoring, tutoring, and whatever else I needed.”

Angela attended MCC under MAPP (Maricopa to ASU Pathways Program), which allowed her to fulfill all of her prerequisites necessary to attend Arizona State University. “MCC helped me with macroeconomics, biology, and statistics, among others. At ASU there’s 200 to 300 students per class, and I needed one on one tutoring that ASU just couldn’t provide. I took four entry level math classes before I even took stats, and I had to learn better study habits.” She said she stayed with social work as her major throughout the process, and has accumulated a 3.58 GPA. “I intend to major in Social Work at ASU in their Bachelor’s program. I will go on to attain my Master’s degree if I do well.”

Angela’s new career goal is to serve underrepresented populations in Arizona. “I want to go in to underserved communities, those with low income status,” she said. “They’re not aware of the services available to them, and I want them to be.”

She also hopes to impart some of the lessons she’s learned while persevering through adversity.

“I knew I was never going to get out of my situation if I didn’t remember my goals and work towards them,” she said. “I wouldn’t have a good quality of life otherwise, and I’m not comfortable at being low income for the rest of my life.”

“You need to have a determination and drive to help yourself,” she said of her journey, one she hopes to share to help others. “You have to take the initiative.”