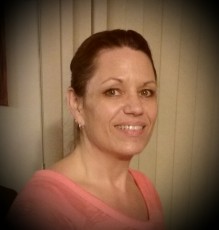 Alisa Tripiciano - Associates in Arts Degree Mesa Community College’s Alisa Tripiciano had accumulated nearly half of her credits for a degree in social work when fate intervened in 2005. A severe car crash resulted in serious spinal injuries and head trauma. Her doctors were amazed she survived the accident. Prior to surgery to remove bone fragments from her spine, they told her it was likely she would be paralyzed.

“They told me I would be lucky if I could ever walk again,” said Alisa, who underwent years of grueling rehab in an attempt to return to a normal life. “They didn’t give me any hope, and I went through years of unsuccessful therapy for debilitating pain and depression.”

“But that wasn’t even close to enough for me,” she said of her resolve to overcome dire predictions. “I didn’t do much for about seven years. Just about every type of physical activity was impossible.”

Alisa said her willpower comes from her faith. She said that she, “grew up in an abusive household but Jesus showed me that, “I have worth and value, that I’m not here by accident. We are all born with a purpose -- seeds of greatness. But even my faith didn’t keep me from wanting to quit plenty of times. I didn’t because I believed I was still here for a reason.”

Even so, returning to college after a near 10-year absence was intimidating. It was January of 2014 when she enrolled for classes at MCC’s Red Mountain Campus.

“On the first day of classes, I sat in my car during a break and cried for 40 minutes. I didn’t leave campus because I knew if I did,  I wouldn’t return.  I felt overwhelmed and had no confidence in my ability to do what would be required, but it was the first real opportunity I’d had for a future since the accident,” Alisa said. “I cut back to half time but didn’t quit, and part of that was that the people in Enrollment Services had been so good to me during that process. They cared, they didn’t treat me like just anyone, they cared that I was a student there. I also got hooked up with Disability Resources right away; the support of that office made a big difference throughout the two years there.”

Alisa graduated in December 2015 with an Associate in Arts and her AGEC requirements for Northern Arizona University, where she is majoring in public administration. She started her NAU studies in January of this year. She participated in MCC’s 90/30 program, taking the majority of her coursework at MCC, then finishing with 30 credits from NAU for her bachelor’s degree.

“It’s a lot harder than I anticipated but I know I can do it because of what I’ve done at MCC” she said. “I’m trying to complete these 30 credits within a year. NAU condenses 16-week courses into seven weeks. I’m finishing up the first four now, and I’ll continue all the way through until I’m finished.”

While at MCC, Alisa had to go all the way back to the basics for her math requirements, and it took her two consecutive years of going to school at RM to earn an Associate with Distinction. At 52 years of age, Alisa said she wants people to take a specific message from her experience.

“Yes it’s hard, it’s the hardest thing I’ve ever been through, but you can make it over hurdles and not quit and let overwhelming fears take you out,” she said. “If I can do it, really anyone can do it.  Going through this process also taught me that there are times when ‘It’s okay, not be ok.’ There will be times you may need to slow down, and times you may even need to sit, and that’s perfectly okay; as long as you don’t quit. If you don’t surrender you will make it to the finish. I won’t lie, it was pretty grueling at times, but that made receiving my degrees and future opportunities all the sweeter.”

Alisa is adamant that MCC and the people at its Red Mountain campus were invaluable in her quest to finish her education.

“The truth of the matter is, every single person I interacted with did something to help me stick with it,” she said. “Not only did I have instructors who knew their topics and knew how to teach, but they cared about their students both academically and personally.”

She applauded her work-study supervisor, Sue Blackwell, who hired her for her first job since the car accident. Math instructor Tara Jones mentored her, and was a confidant and champion for her success. The librarians not only encouraged her, but made sure she obtained the materials she needed. Even the security guards became her guardians during her long nights studying on campus.

“I had to deal with all sorts of obstacles, but every department I dealt with went out of its way to give me what I needed,” Alisa added. “Enrollment Services, Disability Resources, Testing Center, Student Life, even other instructors went out of their way to support me. And I certainly would not have made it through four math classes without the tutors in the Math Lab.

“I had to work a lot harder than when I was in school before the accident and, of course, there were moments of discouragement. By staying grateful for the chance to finish my education, and by keeping my eye on the prize, I was usually able to work through it without too much difficulty.  And when I couldn’t do it alone, those surrounding me kept me going until I regained perspective. The awesome people at MCC Red Mountain, definitely had as much to do with my success as did my own determination.”

As for the future, Alisa said she hopes to work with young adults once she attains her bachelor’s degree, specifically kids aging out of foster care.

She said, “I love being with them and having a hand in guiding them past the pitfalls of growing into adulthood so they may fulfill their own dreams. It could mean working in the public sector or maybe even on a community college or university campus.  Being at Red Mountain showed me just how much I enjoy being in an academic community.”

“I’ve been in go mode for so long I haven’t thought much beyond that yet. Especially since my NAU classes are proving to be another challenging climb,” she admitted. “But that’s more than okay, because I never thought I’d be back in school in the first place.”

It’s a safe bet that wherever Alisa’s talents take her, her philosophy on life won’t change. It’s written on a plaque in her home that she regards each day before she leaves, a simple saying passed on to her by a favorite speaker/author/minister Joyce Meyer.

Alisa said, “It says ‘Do it Afraid.'" We’re all scared of all sorts of things. But if you want to achieve your truest desires, you’re going to have to learn to look straight at what scares you most, acknowledge your pounding heart, sweaty palms and knocking knees, and then jump in anyway.”