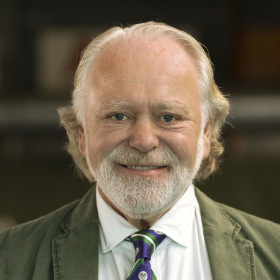 Stellan Björk paired with Jan-Erik Palm to create the Swedish doubles duo that led MCC to the NJCAA Tennis Championship in 1972. Stellan earned All-American honors in 1972 as well as regional championships in 1972 and 1973. Serving as team captain, Stellan notes that the 1973 team was even stronger, and Coach Christensen had the team competing successfully against four-year schools such as ASU, U of A, and BYU. The MCC team earned one of its best records and placed fourth nationally. Stellan went on to Arizona State University where he captured the Sun Devils Invitational Doubles Championship in 1975.

Stellan and Jan-Erik were dubbed the Hokam Netters, a moniker that no longer exists for MCC with the transition to the Thunderbird mascot in 1974. They were recruited by Coach Lot Christensen, who could be a very convincing salesman and made Mesa “THE place to play junior college tennis.”

Stellan fondly remembers Coach Christensen, noting that “he was the perfect coach, leader, and also in time a very good friend. No one other than Coach Christensen could have taken better care of us.” He notes the coach was a turning point that forever influenced his future and still does today.

A former Swedish Army officer, after college Stellan returned to Sweden where he is Executive Director of AB Alelyckans Sportcenter, a racket sports and recreation club in Gothenburg, Sweden.